One of the nicest things about Spring has to be the promise of the growing season to come. I find myself genuinely excited by the appearance of tiny buds on stems and tiny seedlings peeping up above the earth for the first time. The outside world bursts with life and potential. With that in mind I wanted a small project to do with GarlicBoy that would let him sow and watch seeds grow. I have attached a few hanging baskets to his playhouse in the garden and thought it’d be nice to let him have his own little boxes of flowers. Given that this is our tiny urban garden where every inch of growing space counts, I wanted to make them useful as well as pretty and to expand his taste palate by introducing him to edible flowers. I like the idea of him growing his own food from scratch. Luckily I’d been given a sweet little edible flowers kit for Christmas and so we opened it up yesterday and spent an enjoyable hour putting it together. At two, I was worried that GarlicBoy would be bored but he was fascinated by the whole process. He arranged the little coir pots, soaked the coir coins and was astounded when they swelled to seven times their initial size (“Look, the coins are big mummy!”). He wasn’t keen on the taste of the compost (I try, honestly I do, but he’s just so damn quick…) but very much enjoyed filling the tiny pots.

Sowing the seeds themselves was thrilling. First there was the smelling of the seeds, the poking and pouring of the seeds, the multiple determined attempts to taste the seeds and finally the gleeful poking of seeds into the soil. We planted Cornflowers, Calendulas, Dianthus, French Marigolds, Nasturtiums and Wild Pansies. 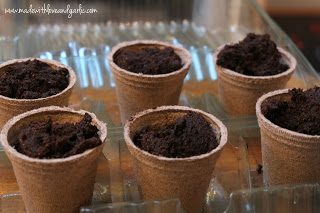 We are taking a lazy approach to herbs this year. With a toddler in the house I sadly don’t have the space to have hundreds of propagators lying about the house as I have in previous years (bring on a garden big enough for a greenhouse..) so I’m buying plugs of most things this year. I’ll revert to being a purist once we’ve moved to the country. This applies to herbs too and as a happy coincidence, the herbs arrived yesterday so we re-purposed a couple of the postage boxes as makeshift propagators that are currently sitting in the sun in the dining room and being checked religiously for sprouting seeds every day after breakfast. What a lovely little project, I can’t wait to see Garlicboy’s face when the first seedlings appear! 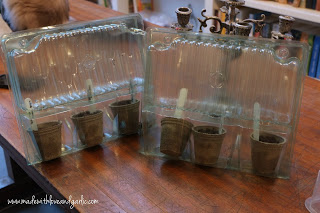