Garlic takes a good long time to mature and so traditionally it would be planted on the shortest day to give it enough time to grow big and strong in time for harvest on the longest day of the year. And so it was that on the 21st of December 2014 I managed to find some time to get my bulbs in the ground and so resurrected both my ambition to grow as much of our food as possible and also this blog.

The clue is in the name of the blog really: I’m addicted to garlic. When I opened the box containing my planting bulbs, my mouth actually started to water at the smell. I ordered ten varieties, and decided to turf out some of the cat grass in the side return raised beds to make space for the garlic.The cat grass grew so fast over the summer that it collapsed on itself and it became ropey and the cats stopped eating it so this year, the raised beds  are going to house my garlic collection instead.

I broke the bulbs open to lay out the cloves, ready for planting. I was in a bit of a rush as we were hosting Christmas and Mr Garlic was in the kitchen dealing with both baby Garlic and all of our Christmas admin all on his own. So sadly I didn’t have time to label the garlic but rather will have to rely on photos showing where each of the varieties is planted.

I ran out of space after planting two or three varieties into each raised bed and so as an experiment, I planted one bulb in a normal pot and another into a hanging bag to see if it grows. I very much doubt it’ll thrive as I’ve never heard of hanging garlic but if it does, it could revolutionise garlic growing in tiny urban gardens! 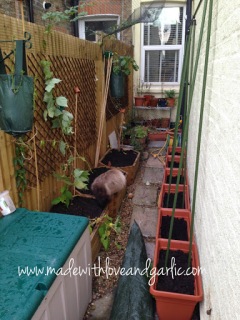