The thought occurs that although we’ve had serious amounts of eggs from our hens so far this year, we haven’t had a single vegetable or fruit. Well, we have had fruit technically I suppose, in that we planted fruit trees and I harvested tiny fruits to stop them developing but obviously tiny immature apples etc can’t be eaten. The reason for this is that we’ve been building our kitchen garden and waiting for our trees to mature, but it does feel odd to be buying things like tomatoes when we didn’t have to last year with only a Victorian London terraced garden of about 28sq metres. Our old garden was tiny but I grew things intensively (more than £160 worth of produce in four raised beds and 40 pots) and our harvest ranged from basil and rosemary to strawberries and carrots with a lot in between.

So I’m really looking forward to getting into proper production later this year. For the last month or so we’ve been working on turning one of our paddocks into a proper kitchen garden. Progress has been frustratingly slow with our perfectionist landscapers gamely ignoring me as I hop about on the boundaries demanding that they allow me to order things like soil for raised beds that aren’t even up yet. Weeks and weeks and weeks were spent removing our old chicken enclosure, repairing fencing, flattening the land, burying an irrigation system, putting in gravel board borders, covering the ground in weed-proof membrane and burying that in shingle and finally this week the 55 initial raised beds started to go up. 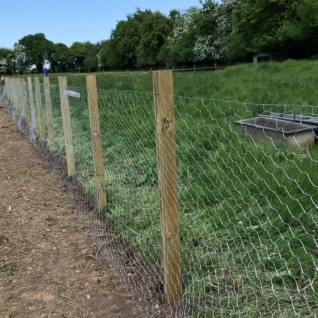 Seeing the first structure appear was enough to send me scurrying for my seed box to start sowing in anticipation of having somewhere to start growing fruit and vegetables. I’ve missed an awful lot of the growing season already this year but I think we’ll still have a decent harvest towards the end of the year, but for now, I’m counting the days until I can start planting out. It’ll be such an enormously important step in making us much more self-sufficient.Bring on the new kitchen garden!

One thought on “Harvest: so much more land, so much less veg”